Good morning from a dark mild Defford where the Major and his Coffee have been up watching the mighty mare Black Caviar win her 19th race on the bounce. 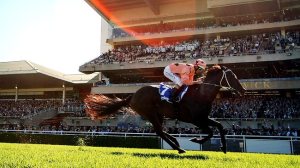 Black Caviar... For the first time, the Major accepts that she might be better than Frankel

Congratulations to all connections, today’s victory is another astonishing chapter in her career.

Firstly consider she was dropped to 5f, a trip well short of ideal.  then consider she was meeting the only horse to have previously give her a race, Hay List, over his ideal distance.  Then consider she had to come off the bridle (pretty rare!) to get the better of him by under two lengths, coming within a whisker of beating the course record.  Great cricket all round.  As an achievement, it ranks with all of her races for the Major.

It reminded me somewhat of Prince Nazeem who as a young boxer seemed capable of anything.  Stepping up two weight divisions to beat Steve Robinson on his home turf of Cardiff.  Let’s hope Black Caviar doesn’t have a penchant for drugs and booze!

What a prospect awaits if connections get Black Caviar to Royal Ascot where she might meet Frankel in the Queen Anne.  What a curtain raiser that would be!  Black Caviar would be probably at the top end of her distance and given a handy mare’s allowance, it would be an unbelievable race.  Please, Jesus, please.

What a day of sport we have on this fine mid February morning.  FA Cup, Ascot, Haydock, Wincanton and a good card in Ireland.  The riches are laid before us, delicacies that remind us how good it is to be alive.  Savour moments like these.

The Major hopes to be posting ante-post round ups for Cheltenham and the National in the coming week, watch this space.  Let’s build the war chest with some winners today.

This looks a hot rematch between Bobs Worth and Silviniaco Conti who look to have the race between them.

The positives for Conti include his Ascot course win (hurdling) and his second to Grand Crus in the Feltham where he had Bobs Worth in behind.  Clearly high quality, sure to run a big race.

However, Bobs Worth however has positives of his own, Henderson cannot do wrong at the moment with a terrific strike rate.  Interestingly, Bobs Worth had a breathing operation after the Feltham suggesting more is expected.  The Major thinks this is telling.

Thus, on balance, I think Bobs Worth is well worth a healthy punt at 6/4 and that is the Rendlesham tip.  As a footnote, surely backing both is a shot to nothing?

This graded hurdle race looks wide open at 7/2 the field and a number of leading contenders.

Thehillsofuisneach has looked an improver in each of his handicap runs but has to concede weight here.  4/1 is a reasonable reflection of his chances.

Ruben Cotter is a Nicholls horse who has not shown enough yet to warrant much more than his 14/1 pricing.  His Chepstow run in heavy ground was reasonable and while better than 14/1, perhaps it is telling that this one holds no entries for the festival.

Brinsdini Breeze looked very impressive winning in difficult conditions over this distance at Newcastle where he made all.  I do worry that this style may not suit in this company and as such is overlooked.  He would have to be top quality to lead this lot a merry dance.

On balance, I am all for Stan James and Ladbrokes pricing of Real Milan at 9/2.  This horse represents last years winning trainer and although the bare form does not quite hold up, I think the scope for improvement is there.

An absolute belter of a lineup with Riverside Theatre (last years winner), Kauto Stone and Medermit.

The Major is siding with Kauto Stone who I am hoping gets Paul Nicholls back into a better line of form.

Kauto Stone has come with a very solid reputation and although he failed to add to that in the Tingle Creek, he was running over an inadequate distance and up against the reigning Champion Chaser, Sizing Europe.

While Riverside Theatre should offer a solid round (with well-being taken for granted), Kauto Stone would not have to improve too much to threaten that form and is probably entitled to be better than previous, particularly now stepped up in trip.

The tip is Kauto Stone, 5/2, Paddy Power or William Hill.

Now the national weights are out, I am sure we will start to see better runs from a number of GN entries, guaranteed of a racing weight in April.

The inclusion of Neptune Colonges has left many of todays runners out of the handicap proper.  The top weight is the class act of the field and should certainly be involved.  That said, although recent efforts have shown some spark, is Neptune Collonges the force of old?

Le Beau Bai and Giles Cross recently slugged it out in the Chepstow mud and both could go well here but the Major looks beyond them.

Two of note, Always Right has obvious chances with a great strike rate (when completing).  Some Target stepped back up in trip will also be a threat.

The tip though is Mohayer at 10/1.  I think the improvement seen this season may not be out of place or, yet complete.  The further this one goes, the better it seems and I am willing to back it at the prices.

My big tips in the footy are Norwich to beat Leicester in the FA Cup, 10/11 is like someone knocking on your door and delivering a thick wedge of sterling.

Bristol Rovers can beat Oxford at home, being a form team, so 19/10 is a bit big.

That’s it from the Major today.  May your dinner tonight be illustrious and bountiful, take many friends and enjoy.

Courage and roll those dice.

The Majors Wednesday tip ran into a place but was not good enough to take the spoils of war.  I returned to take stock of the Thursday cards and there is some good action in Ireland and the UK.

Tinakellylad for the Major in the Thyestes

The top action is at Gowran Park where there is a £52k Chase and a £26k Hurdle race which features the likes of Voler la Vedette and Zaidpour in what promises to be a warm encounter.

It is the chase contest with 18 runners and a beautiful handicap conundrum worthy of the finest racing minds, that attracts the Majors eye though.  A fiendish puzzle, wrapped in an enigma, coded and written down, dismantled and disturbed, only those whose minds can reassemble the fragments dare to assess the eighteen runners.  Dare dip thy crucible in the boiling seething pot?

Sadly you only have the Major as your guide.  I am only an amateur sherpa in these high climes but I come with unbridled enthusiasm, relentless optimism and an idea of the winner.

There is a very strong trend in the Thyestes that the Major is using as the basis of his tips, as I feel two are worthy of backing.

Of the last ten winners, only one horse (last years Siegemaster) carried a burden in excess of eleven stone.  In fact, 70% of winners carried 10 stone 2 lbs or less.  A featherweight is what we are looking for.

I have run the usual calculations and have the probabilities in the Majors eyes for each horse.  Willie Mullins has four runners in a race he has taken with National winner Hedgehunter as well as Homer Wells, all four warrant respect.  Two of them Shakervilz and Some Target sit in the top four of the betting.

Start Me Up would also be of clear interest and he heads the market at 8/1.  Some good bumper and hurdles form and a warm up race over too short a distance actually adds up to an interesting profile.  The price is skinny enough but more money could be significant.

First reserve Tullintain is of some interest to the Major if he gets a run but since we are after something to back, I am going to suggest a 16/1 shot.

The Major has settled on two horses to back for wins.

Tinakellylad is the first selection at 16/1, the Mouse Morris trained eight year old.  There is absolutely nothing wrong with this horses best form having beaten Kempes as a novice.  He has had some problems having been bought down in the Munster National before being pulled up twice.  However last time out at Cork, he returned to a better line of form.

I am backing him to run a decent race off 10st 4lbs, with a further 5lb pull from his worthy jockey A P Heskin.

The second animal is 12/1 Adams Island who gets a Barry Geraghty ride.  His last run was also a turning point in a decent race at Leopardstown.  He has had money come for him in races this year that he has flopped at, this is the second time Geraghty has taken the ride and the Major feels a big run is expected.  12/1 William Hill is the best price.

Have two slices and thank me later.

Tagged adams island, shakervilz, some target, start me up, tinakellylad